The seaside of Ben Tre Province is 60 km of Southern Vietnam’s finest scenery, with an abundance of fascinating opportunities for the curious tourist.

Ben Tre Province is located 85 km South of Ho Chi Minh City in the Mekong River Delta, with an area of 2,315 km 2. It lies below Tien Giang Province to the north, Vinh Long to the west, and Tra Vinh to the south. Ben Tre is nestled between two main branches of the Mekong’s largest tributary, which diverges to create a fertile agricultural region and beautiful coastline. 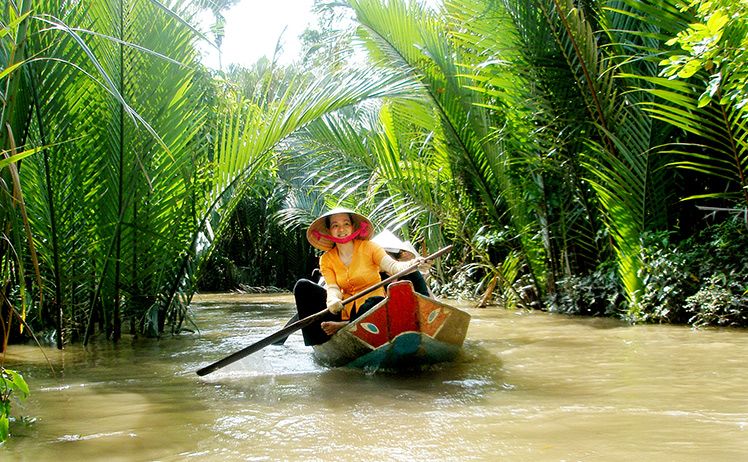 Ben Tre is generally flat, with some surprising topographical features such as sand dunes and unique rock formations. There is a lot of farmland which takes advantage of the area’s abundance of fresh water and alluvial soil. This is a place of diverse and complex river systems, winding water channels and canals. The weather in Ben Tre is typically monsoon tropical with high average temperatures of 26 to 27 o C. The rainy season usually begins in May and lasts until October, with average rainfall of 1,250 – 1, 500mm a year. This climate provides the province with a wide variety of fruits, trees and animals, many of which are rare and valuable species.

At present, the population of Ben Tre is approximately 1.35 million people, based on the National Population Survey in 2009. The majority of the population is from the Kinh ethnic group, followed by Chinese, Khmer and Cham. Like people in other areas of the Mekong Delta River, residents in Ben Tre are humble, generous and hard-working, but they are also courageous and indomitable. This strength of character has proven itself time and again during the two wars of resistance against France and America.