If you have a chance to go to Ho Chi Minh City, you certainly can’t take your eyes off the elegant architecture of the Saigon Opera House. 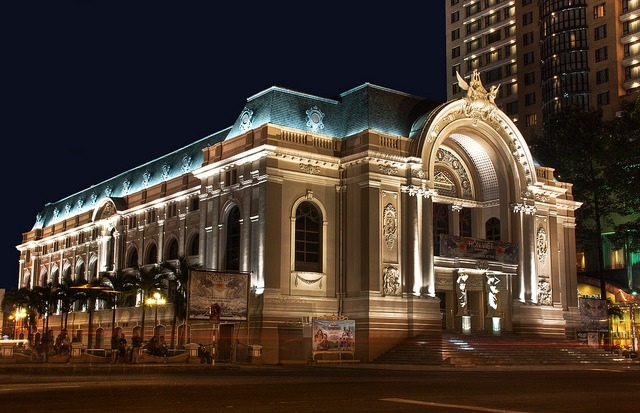 Located at the start of the famous Le Loi Avenue, the building still retails many lively evidences for the influence of French architecture in Vietnam.

At the turn of the 20th century, this magnificent building, designed by French architect Ferret Eugene, was built as a classical opera house with 800 seats to entertain French colonists. Anyone who has been to France can recognize many similarities between the Opera Houseand the Petit Palais. In fact, just like the Reunification Palace, the applied ornament, balustrades, cartouches, and roof were imported directly from France. After 1956, the house functioned as home of the Lower House Assembly of Southern Vietnam. It’s not until 1975 that the opera house was restored to its original purpose of use. Today, the theatre stands at the start of the famous Le Loi Avenue, just adjacent to Hotel Continental and Caravelle, right in the heart of the city.

The style of this majestic building is influenced by flamboyant style of the French Third Republic. People can easily recognise similarities between the façade of this building and the Petit Palais, which was built in the same year in France. Inside, the house has a main seating floor plus two levels of seating above, and is capable of accommodating 1,800 people. All of applied ornament, balustrades, cartouches and roof were taken from France. Additionally, all the inscriptions, décor, and furnishings were drawn by a French artist and sent from his nation.

Renovation after 300th birthday of the city

In order to celebrate the 300th birthday of Saigon, the municipal government invited some of famous architects and artists to restore the house in 1998. Today, renovated with new materials, the theatre is equipped with state-of-the-art electric appliances, lighting and sound systems, and safety equipment. Many original architectural and decorative features have been incorporated, including a stone veranda, white stone statues at the entrance, colourful granite tiled floors, chandeliers, bronze statues in front of the stairs and richly-engraved auditorium arch and wall statues. The Opera House is surrounded by new shopping plazas and posh hotels, which allow you to combine the trip to the Opera House with a shopping tour.

Nowadays, the Saigon Opera House, lying charmingly in the heart of the city’s District 1 area, becomes a theater for a variety of traditional and classical performances such as plays, concerts, ballet, opera, and Vietnamese traditional dance. Moreover, this house – the brightest building of Ho Chi Minh City – is also one of the exciting destinations which no one should miss when visiting this city. The central position of Municipal Theatre makes it pretty easy to be found. The site can be combined to a city tour, as it’s in a close vicinity of Saigon Notre Dame Cathedral and Reunification Palace. Tourists should go for a performance here if have chances.