The square adjacent to the Ho Chi Minh complex is called Ba Dinh square, where many important national historical events in modern history took place. The square was originally developed by French colony and known as Round Point Pugininer. On September 2nd, 1945 – now Vietnam National Day- Ho Chi Minh has read the Vietnam Independence Declaration. In the Declaration, he quoted French and the United States’s Independence Declaration that “All men are created equal and that everyone has the right to life, liberty and pursuit of happiness”. 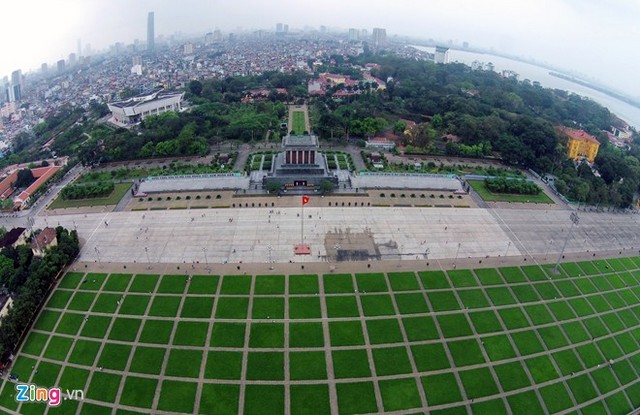 Representatives from all social sectors, including workers, youth, educators, soldiers, cheered over the country’s unity and independence is that historical moments. About 24 years later, the square also hosted the funeral of Ho Chi Minh. It was the same crowd who mourned and cried in the rain to send off their revere leader. It was then decided by in-power Vietnamese government that Ho Chi Minh Mausoleum be built on the square so that the national hero can be forever remembered.

Nowadays, Ba Dinh square is one of the few green and unoccupied areas of urban Hanoi. Many important events such as parades and commemoration of veterans take place at the square. Interestingly, despite its solemnity during the day, during the night time, the square is a popular gathering place for the local: families who want a walk, elderly who want to exercise and friends who want to hang out. A visit to Ba Dinh Square can be combined as a day or half-day trip to Ho Chi Minh Mausoleum, Ho Chi Minh Museum and One-pillar Pagoda.