One of the reasons that Hanoi – the capital city of Vietnam, has attracted so many tourists over the years is its Old Quarter (36 old streets and guilds). It is an area well-known for the history, the architecture, the enormous amount and diversity of products and even the everyday life of its residents. 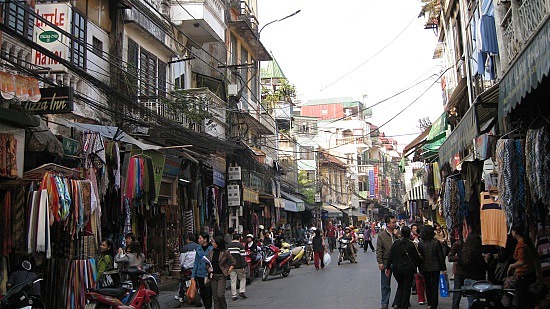 The Old Quarter marked its appearance in the 11th century, when King Ly Thai To decided to build his palace. That means By 2010, Hanoi as well as the 36 old streets turned 1000 years old. Originally a group of workshop villages surrounding the royal palace, the Old Quarter has gradually transformed into craft cooperatives, or guilds and soon gained its reputation as the business trading areas of the Red River delta.

Skilled craftsmen migrated to the Quarter to live and work together in the same guilds, which were made specialized for artisans performing similar services. The new allocation of production and service helped to create a cooperative system for merchandise transportation to designated streets. Soon under French colony, the Old Quarter increasingly became a marketplace for trade between the local and businessmen from China, India and France.

Despite the damages that Vietnam War left in Hanoi, the Old Quarter still retained much of the original traits that interests tourists, especially those with architectural passion. These houses are neither tall buildings as people normally see in cities nor stilt houses on lines of poles, which were popular in Vietnams’ mountainous regions these days. They are also called “tubular houses” which are short and narrow but have great length.

In the past, the king stipulated that “citizens’ houses could not be built higher than the height of the king’s palanquin”. And because of the dense population in a limited area, people needed to spend the front room for stores; the inside room is widened to its length in order to divide places for manufacturing, dining and living of each family.

The house is sometimes too narrow that only one person can pass by at a time. Standing close together, these tubular houses make up the ward along the soil streets; some streets were paved with stone or brick. Only until the later time, they were asphalted.

In addition, visitors as well as city dwellers can go to the night market taking place along 4 walking old streets: Hang Dao – Hang Ngang – Hang Duong – Dong Xuan in the evening from Friday to Sunday with products on great sale. Read our article on Most Special Streets of Hanoi Old Quarter for more ideas.

How to get here

Hanoi Old Quarter is about 45 minutes away from Noi Bai International Airport and 15 minutes from Hanoi Train Station. Most hotels are located in or near the Old Quarter so you can easily walk to these streets without much effort.