No one has the courage to state which exact place in Hoi An is the most ancient and beautiful, but many people know the Tran Family Chapel is one of the oldest and most historical houses in this city, dated back to the beginning of 19th century. This was built by Tran Tu Nhac – a highly-respected mandarin under Gia Long Reign, before he was sent to China as the King’s envoys. Initialement, it serves as a worshipping place for the family’s ancestors, as well as a reminder about the family’s tradition to the following generations. Aujourd'hui, tourists can find this famous must-see attraction in the old town Hoi An, à 21 Le Loi Street. 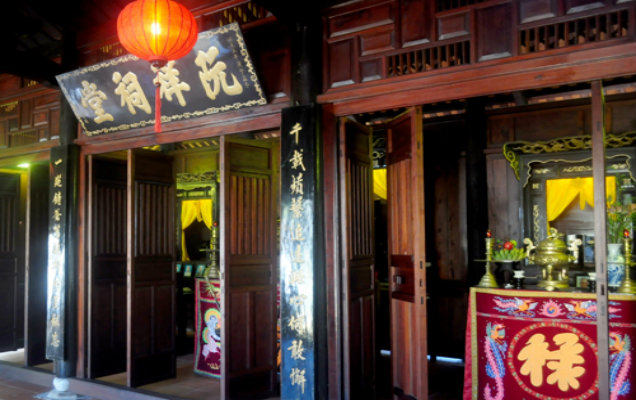 Sitting amidst a 1500m2-garden of ornamental plants, fleurs, fruit trees and century-old plants, with a gate and high surrounding walls is a combination of Chinese, Japanese and Vietnamese architecture, which has remained almost the same as two centuries ago. Made of precious wood and pan-tiles-covered roof, the house has become well-known for its Asian style of architecture: one main part for worshipping, and one supplemental part which houses the leader of family and his guests. The house and the garden were built in harmony following strictly the rules of Feng Shui. The drawing room of the chapel has separate entries for men and women: the left is for men and the right is only for women, according to old belief. There is another door in the center of the room, used for festivals such as Tet, which is said to be the door for souls of the ancestors to enter the house.

Chaque année, the Tran Family Chapel is still the gathering place for all members of the family to meet and express their thankfulness to their ancestors. Aussi, parents in the family would educate their children about the clan’s traditions

For tourists who are in love with the unique and historical atmosphere of ancient sites, a visit to the Tran Family Chapel will be one of the most remarkable parts of Hoi An experience, as history and tradition are not only imbued in the relics of Tran Tu Nhac like a sword and a seal, but also in every corner of the house: in old family pictures, in the cozy atmostphere of the family gatherings.

The house is located in the center of the old town hence it’s easy getting there, especially by bike and on foot.

The site opens from Mon to Sun, à partir de: 08.30AM to 06.00PM. Admission fee is different for Vietnamese and foreigners: VND 40,000/3 sites (Vietnamese) and VND 75,000/6 sites (foreigners). Note that ticket in Hoi An is a little bit different from other places. One ticket will allow access to: all the old streets of the Heritage Town, one of the four museums, one of the four ‘old houses’, one of the three ‘assembly halls’, the handicraft workshop and traditional music concert, and either the Japanese Bridge or the Quan Cong Temple.