After a 15-minute ride from the centre of Danang, the biggest city on the Central Coast of Vietnam, I reached its renowned stone carving village, Non Nuoc, which lies at the foot of the picturesque Marble Mountain. 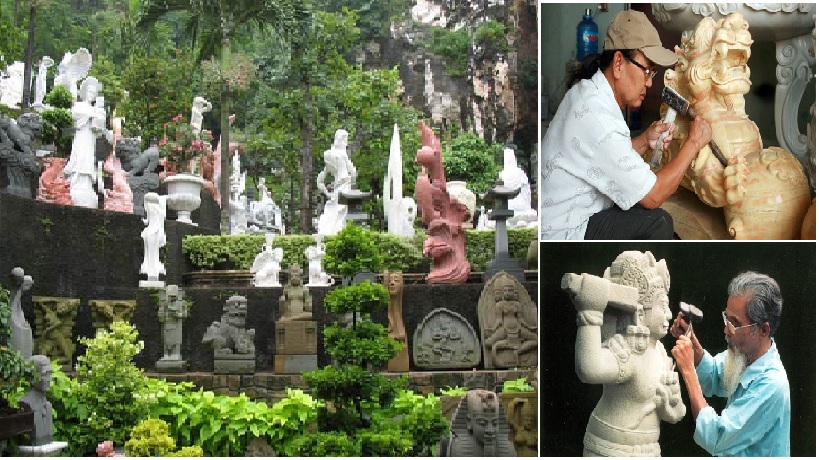 In the village, there are thousands of craftsmen working day and night to turn stone into works of art.

Speaking with 89-year-old Le Ben, one of the oldest artisans in the village, I found out that about 400 years ago, this village was established by Thanh Hoa resident Huynh Ba Quat, an expert in carving.

Le Ben shared that in the first half of the 17th century, Huynh Ba Quat left his hometown and went to Marble Mountain. Realsing that the area was abundant in marble, he decided to take some home and turned it into epitaphs and millstones. After receiving complements from villagers, Huynh Ba Quat passed his skills on to the younger generation.

“At that time, the most popular marble products were stone blocks to anchor boats, a variety of millstones, and tombstones. Besides, sculpture of sacred dragons, phoenix, turtles for pagoda, temples, and mausoleums were also in high demand,” says Le Ben.

Almost every tombstone in Quang Nam-Danang area from the 17th century to now has been made by Non Nuoc artisans. The Non Nuoc villages now also carve historical figures, spiritual characters and international celebrities.

Walking along Huyen Tran Cong Chua street, which features about one third of the stone art producing houses in Non Nuoc village, I was taken aback by thousands of stone artifacts of many sizes. The majority are spiritual, such as statues of Buddha, Maitreya, and Guanyin. There are also scared animals such as the dragon, phoenix, lion and elephant.

According to Tran An, the owner of Tran An Stone, the village’s leading sellers are statues of Vietnamese spiritual characters: “In order to meet the need of foreign visitors, we also make Christian characters like Jesus and Saint Mary.”

Love and dedication is needed to produce each piece and some take an artisan weeks or even months to finish. “If you are hardworking, you can create a miniature after a few months of learning. However in order to carve a more complicated statue, you have to study for years,” Tran An explains.

On the trip, I met a young craftsman named Tuan who has been studying carving for two years. “Before carving, we have to make a sketch on a stone block first. When I started learning, I made a lot of mistakes such as chiseling too hard or too soft. As a result, it took me months to finish my first product, which was only 20-centimeters high,” Tuan shared.

One of the hardships that Non Nuoc artisans have to face is breathing dusty air everyday. As a result, many people have to resign because of lung diseases even though their love for carving is still burning. Instead, they move to the sales teams so that they can contribute to their traditional profession.

American tourist, Alena, told me that she heard about this village from a friend. “When I saw the miniature sculpture he brought home, I knew that I would visit Vietnam someday.”

My taxi driver, Luong, told me that an Australian came and spent over US$200,000 on marble here. “They don’t have this type of art in other countries, so people are willing to spend thousands of dollars,” he said. “Yesterday a lady bought a 1.3 meter high Guanyin statue for about VND80 million (US$3,700).”

Currently, Non Nuoc village is home to around 500 manufacturers providing over 4,000 jobs with an average wage of VND2-3 million (US$92-134), which can give a Danang family a decent life.

Say goodbye to Non Nuoc village, I could see a bright future for Danang city and Ngu Hanh Son district in particular.